The Moccamaster Cup One is Technivorm’s contribution to the single-serve line-up. The Cup One features the same design and build as the larger batch brewers while delivering a single cup of coffee at a time. We take a look at the Moccamaster Cup One to see how it performs and compares to the trusty V60 pour-over brewer.

The Moccamaster range is already highly acclaimed in the specialty coffee world and so we are excited to examine their newest offering. 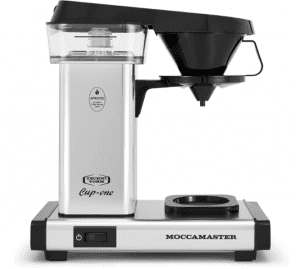 The Moccamaster Cup One sports the classic, retro vibes of the other Technivorm brewers. The first Moccamaster was released in 1968, and every model since then has, by and large, kept to the same design. It is available in a matte black or polished silver. Being a single serve machine, the Moccamaster Cup One has a smaller footprint than the other brewers, so it can easily slip into a spare space on the counter. The Cup One doesn’t have any heating plate as it is designed to brew a single cup at a time. It does come with a removable cup holder to accommodate larger mugs.

Technivorm has earned a reputation for producing reliable brewers with exceptional build quality. And the Moccamaster Cup One is another of their brewers that has hit the mark. Hand-assembled in the Netherlands with quality components, it is built to last. Technivorm also backs it with an impressive 5-year warranty. Overall, we cannot fault the design of the Moccamaster Cup One, its timeless design and excellent build quality make it well worth the price.

The Moccamaster Cup One has a simple design making it easy to operate. The brewer consists of a water reservoir, water outlet arm, filter holder, and cup holder. Brewing a cup of coffee is as simple as filling the water reservoir, adding a filter and ground coffee, then flicking the power switch. The brewer is very quiet when in use and switches off automatically after brewing.

Brewing with the Moccamaster Cup One

The Moccamaster Cup One utilizes a similar brewing system to the other Technivorm brewers.

One of the key factors contributing to the excellent coffee it produces is that the Cup One has superb temperature control. It can reach and maintain an optimal water temperature of 92 to 96 °C (195 to 205 °F) during brewing. This is achieved through a copper heating element that rapidly heats the water. This is one of the reasons that the Moccamaster Cup One is certified by the Specialty Coffee Association of America (SCAA) and the European Coffee Brewing Centre (ECBC).

Unlike the other Technivorm brewers, the Moccamaster Cup One does not have a shower screen to evenly distribute water over the grounds. While some users were concerned that this would result in uneven extraction, this does not seem to be the case. The Moccamaster Cup One has a unique semi-immersion brewing method, whereby the water arrives in the filter much faster than it flows out. This means that the drawdown time is primarily determined by the small outlet hole designed to optimize brew times.

The other factor determining extraction is grind size. The Moccamaster Cup One works best with a medium grind size. If you find your drawdown time is too long, try grinding coarser and vice versa. If your grind size is too fine, the coffee will be over-extracted and bitter. If too coarse, it will be under-extracted and sour. Some users recommend giving the coffee in the filter basket a gentle stir to ensure even extraction.

The Moccamaster Cup One is capable of producing a consistent and balanced cup of coffee. Given the filtered steeping, it has a different taste profile to that of traditional pour-over. The Cup One makes coffee with a deeper body and a more complex flavor profile. While it can brew light roast or single-origin coffee, it really shines with medium to dark blends.

The Moccamaster Cup One is all about simplicity and consistency. So provided you are using fresh, high-quality beans set to the right grind size, this machine will do the rest of the work to produce delicious, smooth filter coffee. 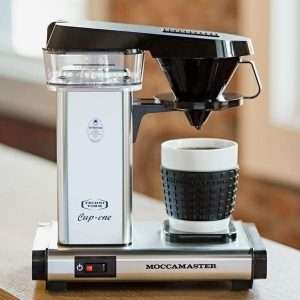 The Moccamaster Cup One is very simple to clean. After each use, you throw away the used filter and coffee grounds; then hand wash the filter holder using warm water and detergent. There have been several complaints that the small outlet hole on the filter basket clogs easily, resulting in the brew basket overflowing. While this is a known issue, it is easily avoided if you wash the basket properly. Technivorm also includes a cleaning brush to remove any coffee grinds that might have escaped the filter.

Technivorm recommends descaling the Moccamaster Cup One after every 80 cycles (or every box of filters you use). To do this you fill the water reservoir with descaling solution according to the directions, then run through the brew cycle. Following this, repeat the brew cycle 2-3 more times using clean water to rinse.

Moccamaster Cup One vs V60

The Moccamaster Cup One occupies an interesting niche, where it is trying to automate a pour-over coffee brewer. So how does it compare to the tried and true v60? When it comes to the quality of coffee produced, we would say it is no comparison to the v60. The v60, when brewed correctly, makes a very different cup- almost tea-like, with good clarity of flavor. A v60 highlights the bright, fruity notes of a coffee.

In comparison, the Moccamaster Cup One produces a deeper and more complex brew with more muddiness. If you are comparing ease of use, however, the Cup One wins every time. The Moccamaster Cup One is super simple to operate and produces a consistent cup of coffee. However, if you have mastered your pouring technique, you will likely find a v60 may produce a more complex cup.

Who Is The Moccamaster Cup One For?

The Moccamaster Cup One fits a somewhat unique niche. It is really for the specialty coffee lover who is looking for a single serve machine. It will far exceed your run of the mill drip coffee maker and will make some superb coffee if paired with high quality and freshly ground beans.

However, to be honest, there are a few drawbacks to this machine. The first and greatest is that it can only brew a single cup of coffee at a time. This is of course the aim of the machine. However, it is restrictive and it would be nice if Technivorm had brought out a machine that could do either single or multiple cups like the Breville Precision Brewer. Most of us have times when we want only a single cup and other times when we want to be able to serve multiple people at once.

The other downside is price. This is a rather pricey machine as are all Moccamasters. While you are assuredly paying for quality, you are paying a lot of dough for a single cup brewer!

Moccamaster Cup One- The Verdict

The Moccamaster Cup One is an excellent single-serve coffee maker that offers exceptional build quality, a five-year warranty and most importantly, produces a decent cup of coffee. The Cup One is all about simplicity. It is built to do one thing and one thing well; to produce a delicious single cup of coffee. 2 thoughts on “Moccamaster Cup One Review”