Does Coffee Stunt Your Growth?

“Eat your carrots, they help you see in the dark”

“Dry your hair properly or you’ll catch a cold”

We have probably all heard these sayings bandied about when we were kids. And being coffee lovers we decided to investigate further to see if this claim regarding coffee is accurate. Was this just a ploy used by your parents to keep the kids away from the coffee or is there some truth to the claims..?

So… Does Coffee Stunt Your Growth?

The long and short of it is a resounding NO. There is no scientific evidence that coffee in any way stunts your growth. We will look a bit further into how this belief came about and what the risks and benefits of drinking coffee. But if you are just looking for a quick answer then don’t worry, drinking coffee is not going to make you any shorter and unfortunately, it won’t make you any taller either. Your height is largely determined by genes and diet not coffee consumption.

How Did This Myth Originate?

Like most myths, no one really knows where the ‘Coffee stunts your growth’ misconception came from. There are two main theories:

The first as printed by the Smithsonian Magazine is that the idea can be traced back to claims made by a company called Postum in the early 1900s. This company produced a coffee alternative and as a way of marketing wrote ads attacking coffee. Among their many claims was the idea that coffee was unfit for children as it made them sluggish, irritable and sleepless, it robbed them of “rosy cheeks and sparkling eyes,” it led to failing grades and “it hampers proper development and growth.”

Somehow this idea became rooted into minds and has been passed down through the generations ever since. 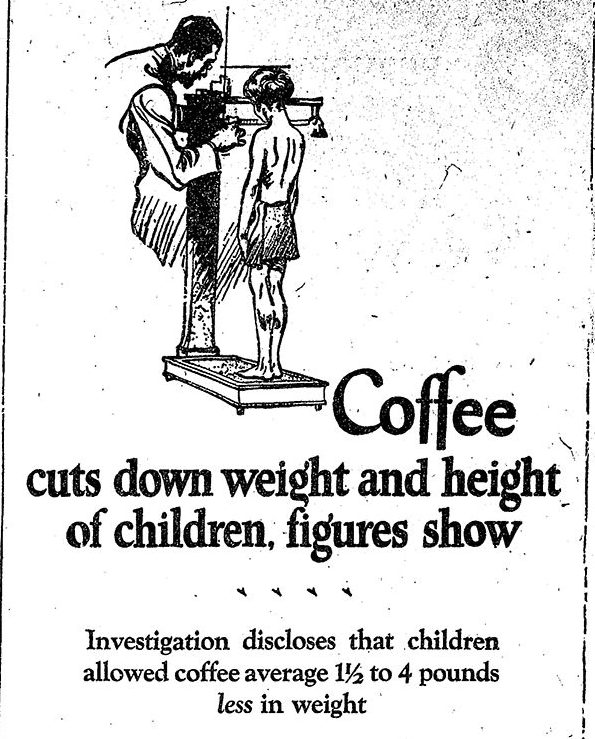 The second theory behind the origin is from early research (1) conducted in the 1980s and 1990s which suggested that coffee (or more specifically caffeine) caused reduced calcium absorption which is necessary for bone growth and development. This research was later proved to be inaccurate with further studies (2) showing no correlation between caffeine and bone health. But this led to the belief that coffee causes osteoporosis which somehow might lead to height loss? As you can tell the correlation is rather vague but somehow the idea stuck around for years.

Given recent studies, we can safely say that the myth that coffee stunts your growth is now debunked.

Risk and Benefits of Drinking Coffee

So now we know that coffee is not going to stunt your growth. Are there any other risks or benefits to drinking coffee?

It’s a well known fact that caffeine causes you to be more alert and increases your energy. But while this is a massive benefit (especially for those bleary eyed mornings) it can become an issue. Particularly if you drink coffee late at night, you may find that it causes insomnia.

While there are multiple health benefits from drinking a moderate amount of coffee, excessive consumption can be very unhealthy. This is a particular risk for women who are pregnant or trying to get pregnant. Excessive caffeine can cause a reduction in fertility and miscarriage. It also pays to be aware of what type of coffee drinks you are consuming. Sweetened drinks topped with flavored syrups, whipped cream and shaved chocolate taste delicious but be aware they are full of sugar and excessive consumption will cause weight gain.

Finally any coffee lover will know what I’m talking about when I say caffeine withdrawal headache… we have all had that time we missed our morning coffee and paid the price. While coffee is delicious… it is addictive! Withdrawing abruptly can cause symptoms such as headaches, migraine and heartburn. Totally worth it though!

There are countless benefits to drinking coffee in fact we have even written an article on them here. We have summarized some of the main ones below:

As mentioned above, caffeine is a stimulant so a major benefit is that it causes greater alertness as well as slowing the onset of tiredness. Caffeine in coffee also improves exercise performance, increases brain function, slows metabolism, and protects against Heart Disease and Type 2 Diabetes… can’t complain about that!

Chlorogenic acid is an antioxidant found in coffee. As an antioxidant it helps protect cells from damage that could lead to cancer. They have also been touted to lower blood pressure and aid with weight loss.

There are many other health benefits to drinking coffee such as protection against Alzheimers, Parkinson’s, Stroke and Liver cancer. But we won’t go into detail here. Note that most of these benefits are based on research from people drinking black coffee without additives.

Overall the evidence would suggest that the case for drinking coffee is a strong one! 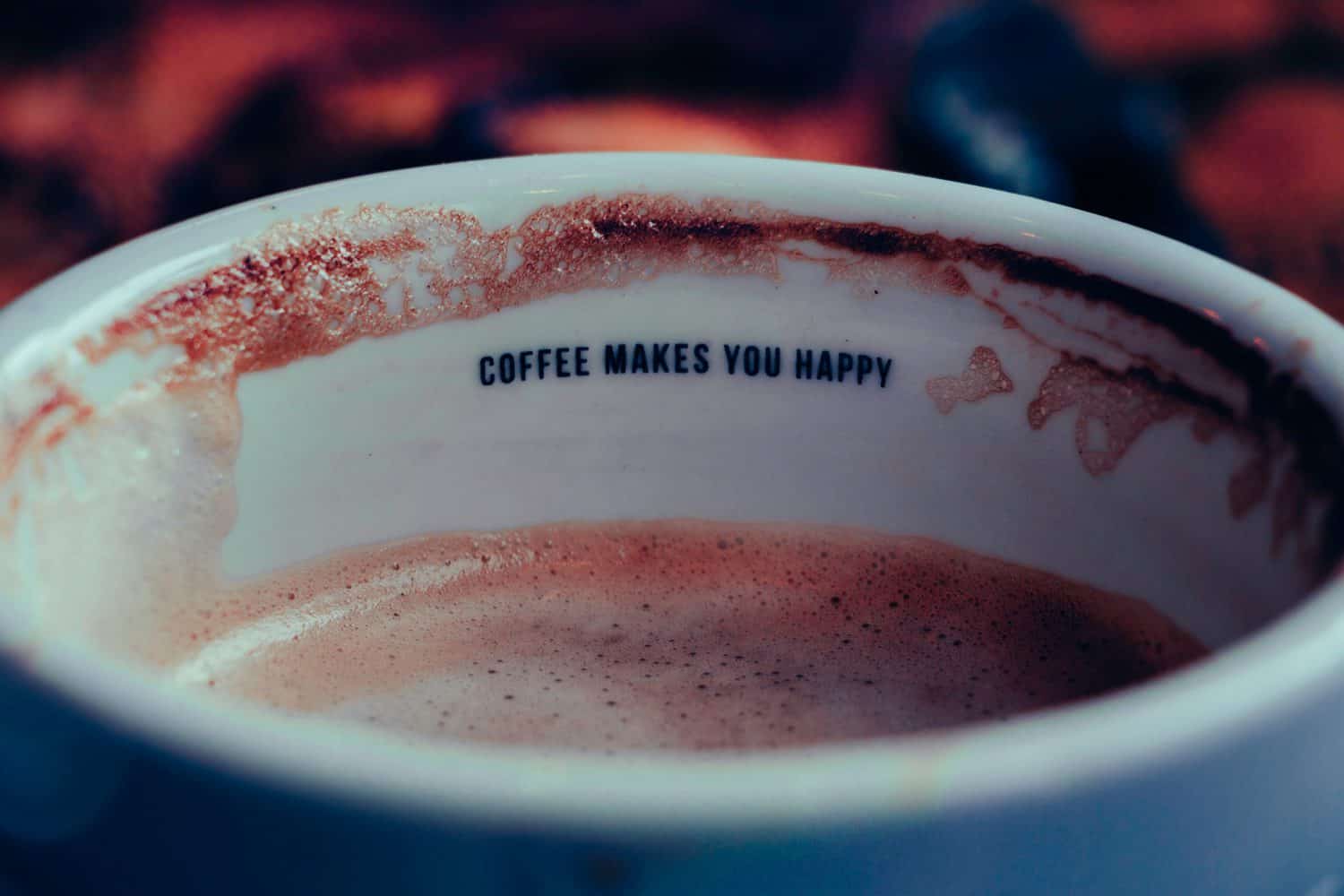 How Much Is Too Much?

So now that we have established that coffee can be pretty good for you what is the recommended daily intake?

The recommended daily intake of caffeine for adults is 400mg. Your average cup of coffee contains around 95mg of caffeine which means you can safely consume around 4-5 cups of coffee a day.

The FDA recommends limiting the amount of caffeine during pregnancy and in breastfeeding to 300mg per day (around 2-3 cups) as excessive intake increases the risk of miscarriage and can cause low birth weights.

Health Canada recommends the maximum daily intake of caffeine for children under 12 does not exceed 2.4mg/kg per day. For the average child this is:

Just be aware that caffeine is also in other food and drinks like tea, soda, energy drinks and hot chocolate.

Well does coffee stunt your growth? The answer is a resounding NO! While there has long been the misconception that coffee does cause stunted growth particularly in adolescents there is no evidence to support this. In fact, as we outlined above, coffee actually has many great health benefits.

If you are a parent concerned about your adolescents coffee intake, we would suggest that coffee is far better than other caffeinated drinks such as coke or pepsi. Just try not to add too much sugar! Ultimately how tall (or not) you are depends on your genes and eating a healthy balanced diet not coffee intake. So enjoy that coffee and all the health benefits that come with it!