There is a lot of confusion surrounding the term Breve Coffee.

If you order a Breve at Starbucks you will likely find yourself the lucky recipient of a cup of steamed half-and-half! Whereas if you order a Cafe Breve you will get a rich, creamy latte with half-and-half instead of milk. So what is the go!?

In this article, we are going to answer the question of what is a breve coffee and compare it to other common espresso-based beverages.

What Is A Breve Coffee?

A Breve coffee, pronounced “breh veh” is another name for a cafe breve or breve latte. A Cafe Breve is an American version of the traditional latte, where the steamed milk is replaced with steamed half-and-half.

The word Breve is the Italian word for ‘short’, and this is a good description of a Breve coffee. A Breve coffee is typically a small drink, served in a 4.5-ounce cup with equal ratios of espresso and steamed half-and-half.

Given that half-and-half is used, a Breve coffee is far richer and creamier than a traditional latte and usually doesn’t require additional sweeteners. This decadent espresso drink is typically served after dinner as a dessert coffee.

The most obvious difference between a Breve and a Latte is that a Breve is made with half-and-half whereas a latte is made with whole milk. Because of the different dairy components, the two drinks have distinct textures.

Whole milk is easier to aerate than half-and-half, so milk for a latte is textured to microfoam with a smooth and velvety finish. A latte is typically served as a 2:1 ratio of milk to espresso, so isn’t as strong as a Breve. It is served in a 6 oz glass or cup and embellished with beautiful latte art on top.

With a Breve coffee, the half-and-half is steamed rather than textured, producing a thick, fluffy foam. A Breve is served as a 1:1 ratio of espresso to half-and-half producing a more concentrated drink. It is served in a smaller 4.5 oz glass with a small amount of the steamed half-and-half and topped with thick foam.

A Breve coffee shares the same 1:1 ratio of espresso to half-and-half. However, the use of half-and-half creates a slightly different mouthfeel. When steamed, it forms a fluffy foam and is richer and creamier than milk.

Just to add to the confusion, Starbucks has its own definition of a Breve coffee. At Starbucks, Breve means half-and-half so if you go and order a Breve at Starbucks you will likely end up with a cup of steamed half-and-half.

So to avoid confusion, make sure you specify what type of drink you want with half-and-half. For example, a Breve Cortado or Breve Latte.

How to Make A Breve Coffee At Home

A Breve coffee is remarkably straightforward to make at home if you already have an espresso setup.

Espresso is made by forcing hot water through finely-ground coffee at high pressure. It produces a thick, concentrated shot topped with crema. Espresso is the base of most coffee shop drinks including Latte, Cappuccino, Flat White, Cortado, and of course a Breve.

Because the espresso is so essential to a Breve coffee, you do need an espresso machine to make this drink. A French press or Aeropress just won’t cut it! The best coffee to use for espresso is a medium to dark roast. This will produce a strong, heavy shot that will cut through the sweetness of the half-and-half.

A Breve is usually made with a double shot of espresso. A 1:2 ratio is a good starting place to produce espresso. So 18g of coffee in, 36g of espresso out in around 26 seconds.

The second component of a Breve is the half-and-half. If you live in the US or Canada you should be able to find half-and-half at your local grocer. If this is not available, you can make your own using equal parts whole milk and heavy cream.

To steam half-and-half, you use the same technique as you would for steaming milk. Because half-and-half has a higher fat content it doesn’t aerate as well as milk and produces a fluffy, thick foam. When pouring the steamed half-and-half, you will have to hold back the foam, then spoon a little on top at the end.

A Breve coffee is typically served with equal parts espresso and steamed half-and-half. It is served in a small 4.5 oz glass, known as a cortado or Gibraltar glass. This ratio confers the best balance of flavors with the decadent half-and-half cutting through the strong espresso. A Breve can be served with a higher proportion of dairy if you don’t like a strong coffee, however, the half-and-half can be overpowering. Because of the high-fat content half-and-half is sweet and rich, so a Breve coffee doesn’t need additional sweeteners.

Is A Breve Coffee Unhealthy?

Given that half-and-half has a much higher fat content than milk, a Breve coffee has a higher calorie count compared to traditional espresso drinks. So yes, it is unhealthy. We would recommend drinking a Breve coffee on occasion as a sweet treat rather than your daily driver.

In summary, a Breve Coffee is an Americanized latte. It pairs equal parts steamed half-and-half with strong espresso for a creamy, decadent drink.

So set aside the calorie counter, and give a Breve coffee a go, diet starts tomorrow, right? 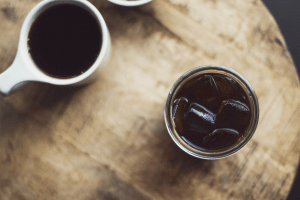