The Baratza Vario is a premium burr grinder aimed at having the flexibility to grind for both espresso and manual brewing. The Baratza Vario grinder utilizes ceramic flat burrs for durability and grind consistency.

While the Baratza Vario is advertised as being able to deal with light commercial use, this would be a stretch. Instead it excels at being a high quality burr grinder for the home coffee enthusiast. As opposed to an espresso grinder like the Mazzer Mini, the Vario is an all purpose coffee grinder which is designed to have the capacity to grind for both espresso and filter.

The Vario has been on the market for some time now and so has gained its fair share of both followers and critics. In this Baratza Vario Review we will take an in-depth look into the grinder and the various models available. We will also compare the older model with the latest updated version; the Baratza Vario +.

The Baratza Vario is a high quality flat burr grinder for the home coffee enthusiast. It’s strengths include its 54mm Ditting burrs, an impressive 230 grind settings, the ability to switch easily between grind settings, and its reputation for longevity. This coffee grinder is not for the beginner, but instead for the coffee lover seeking a high level of grind consistency. 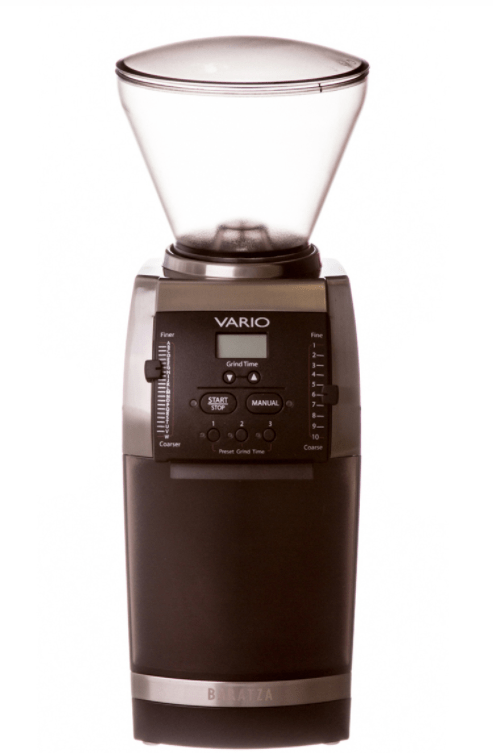 If you are considering investing in the Vario burr grinder, there are several different models you can choose from.

Both the Vario W and W+ only have the option of grinding into the grinds bin as opposed to directly into a portafilter.

Grind Settings on the Baratza Vario

This fits Baratza’s intention for the grinder. As Baratza says on their website, the goal was that this would be a grinder in which you could ‘fine tune your espresso shots or brew a Chemex or French Press for all your friends and family.’ This is an all-purpose coffee grinder that should be able to cater to both espresso and manual brewing methods.

The Baratza Vario grinder uses a rather unique grind adjustment system that can take a while to get used to. On the front plate of the grinder, there are two levers, one of which numbers from 1-10, and the other which numbers from a-w. The 1-10 lever gives you the macro adjustments to put you in the general ballpark for your given brewing methods. The a-w lever then gives you micro adjustments which help you fine tune and dial in to the precise intended grind size.

This is considerably different from many other common grind adjustment systems and has met with a mixed reception. On the one hand it is actually fairly easy to use and means that it is easy to come back to a specific grind if you are switching brew methods. On the other hand, some customers have complained that there is some slippage with this system. This seems to happen more often with very fine settings. So if you are dialing in and then leaving the grind setting stable it won’t be a problem. But if you are often switching between espresso and filter, you may find that for espresso you do have to fine tune each time.

However, this slippage isn’t something that many users would notice. It is more for those comparing this with say the Mazzer Mini or the Niche Zero grinder.

The next point of consideration is grind consistency. The Baratza Vario grinder boasts 54mm ceramic flat burrs. This choice of burr material may come as a surprise as many home baristas would associate a ceramic burr grinder as lower quality than their steel counterparts. However, these burrs are anything but low quality. They are manufactured by grinder manufacturer Ditting and are exceptionally well made. The advantage of ceramic burrs is that they tend to stay sharp for twice as long as steel burrs. Similarly, Baratza has done extensive taste testing with ceramic and steel burrs and concluded that for espresso, ceramic often actually tastes better and produces more mouthfeel than their steel counterparts.

In technical terms, it has a grind range from 230 microns to 1150 microns. Basically, overall the grind consistency is excellent across a range of particle sizes. Although this will not grind coarse enough for traditional French Press, it is designed to be an all purpose grinder as opposed to an espresso grinder. Also, due to popular demand, Baratza has released steel burrs which can be used with the Vario. As a premium electric grinder, the Baratza Vario gives excellent grind consistency. The difference between the Vario and say Baratza’s entry level Encore is considerable.

Overall, the Baratza Vario is made of high quality components. The electric grinder is powered by a high torque DC motor that ensures the burrs rotate at a steady 1350 RPM. The casing of the grinder is mainly plastic which is unfortunate. It is certainly sturdy and can deal with a beating but undeniably plastic does just feel and look less premium that metal. Similarly, when released there was some controversy as the burrs are mounted in plastic which is unconventional for a high-end burr grinder. However this has been changed in the latest version, the Baratza Vario + now has a metal grind chamber.

The Baratza Vario is a time-tested all-purpose grinder- in fact, many users boast that their Vario’s are still operating well 10 years down the track.

In general, the Vario is a pleasure to use. It is a very quiet grinder which is immensely helpful in a domestic setting (think spouses/partners at 6am…). It has a small footprint and so can easily fit into most kitchens and coffee stations. In addition, the Vario has been intentionally designed to have a very short and direct grind path. This means there are less places for ground coffee to accumulate in the grinder and so less retention.

The grinder also comes with the ability to set up to three time-based presets for automatic dosing. Although you will still need to manually set the grind size, this does help workflow and is a nice feature. This can be set within an impressive 1/10 of a second. Also, like other Baratza grinders,  the Vario has a thermal cutoff switch to prevent the motor from burning out. It is also worth mentioning that Baratza has a well earned reputation for customer service. So if your Vario does play up you can be sure Baratza will have your back.

The Baratza Vario has become a popular grinder for modding. If this is up your alley, with a few tweaks it is a coffee grinder that can compete with the heavy weights at a lot more affordable price. The most common mod is to switch out the burrs for the Baratza Forte steel burrs. This simple and inexpensive mod will cost around $60 but will drastically improve the cup quality. The steel burrs favor clarity, rather than the traditional espresso profile typical of ceramic burrs.

Other common mods include:

This video by Lance Hendrick is an excellent summary of how to do the different mods.

Which Model to opt for?

So if you have come to the end of this Baratza Vario review and decided it is the grinder for you… which model should you go for? The first thing to consider is whether you need the weight-based dosing. For most people, this won’t be necessary, especially if you are intending on modding the grinder for single dosing. The decision then comes down to the Vario or Vario +. The price difference between these two models is about $50 so we would recommend opting for the Baratza Vario +, with the better build.

So in summary, who should consider purchasing the Baratza Vario grinder? And the answer we would give is the home enthusiast looking for a high quality burr grinder on a small budget. This grinder is affordable and if you put the work in, it can product outstanding results. Switching out the burrs for steel ones and aligning them will drastically improve the grind quality.

The genius of the Baratza Vario is its versatility and flexibility. It is a good grinder if you are regularly changing between brewing methods and looking for a single grinder to cater to your needs. 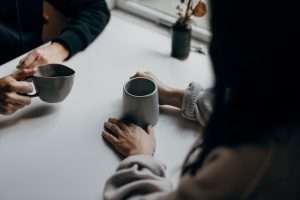