Aeropress Cold Brew may be just what is needed to get you through summer. One of the delights of the warmer season is beer; another is cold brew. I remember the first time I discovered cold brew; it revolutionized my life. I found that my love of the good stuff didn’t have to be restricted to the cold winter mornings but could continue even in the scorching days of summer. There is something deeply satisfying and enjoyable about cold brew over ice under the blue sky and blazing sun.

And that is why I am so excited to introduce you to Aeropress cold brew. If you own an Aeropress, then this is both another recipe for the repertoire and probably the easiest way to produce cold brew that I know.

This recipe was first ‘discovered’ by Aeropress inventor Alan Adler. As you may know, there is a range of different ways to make cold brew, but what sets this recipe apart is the staggering claim that it can be done in under two minutes! If you know much about cold brew, you may be understandably skeptical. Most cold brew is made by allowing coarse coffee grinds to sit or ‘steep’ in cold water for 12-24 hours. So the claim it can be made in under two and still taste good is pretty staggering.

The recipe functions on the basis of a single presupposition, and that is that constant agitation can sufficiently speed up extraction to replace a long steeping time. So what is the Aeropress cold brew recipe?

Step one: Set Up and Rinse Filter

In this step, you need to get everything set up. This means setting up the Aeropress or Aeropress Go and rinsing the filter paper.

You need to measure out 16g of fresh coffee beans (or one rounded scoop of drip coffee) and grind to a grind size close to espresso. Unlike standard cold brew, it is vitally important to use a very fine grind size to get optimal extraction and flavor. Once ground, add to the Aeropress and tare scale if you are using a coffee scale.

Once the Aeropress is set up, pour in room temperature filtered water either up to the #1 mark or around 70g of water (You don’t need a gooseneck kettle for this).

Now start a timer and vigorously stir for a minimum of 1 minute. This step is what really matters in the recipe. The constant agitation speeds up extraction. You can use the Aeropress paddle to stir, or else a spoon or chopstick.

You are now ready to press down. Add the top part of the Aeropress and slowly and gently press down. If you feel too much resistance, then pause and wait 10s and then press again. Press all the way down. The small amount of liquid that comes down will form the concentrate for the Aeropress cold brew. I found that I typically get 50-60 grams out.

You now have the concentrate for the Aeropress cold brew and can dilute to suit your tastes. According to the official recipe, you should add iced water to bring the volume up to 8oz or 237ml. However, you can also add milk or less or more water, depending on your tastes. I typically add enough filtered water to fill a single cup, with a total brew weight of around 180-200ml. Now pour over ice, and you have a delicious cup of cold brew Aeropress. Step 6: Dilute concentrate with iced water up to 200ml and add ice

My Experience of It

I must admit I was pretty skeptical when I first discovered this recipe. I expected it to be weak and flavorless. However, from my very first attempt, I was pleasantly surprised.

I initially tried the recipe with some fresh Brazilian beans we had lying around. And I added refrigerated water up to 237ml as well as ice cubes. And to my surprise, it was relatively delicious. It was very smooth and sweet and still had the discernable flavor notes I was getting from my hot Aeropress brews.

Since then, I have constantly tweaked the recipe and played around with it. The most significant factors I found myself altering were the grind size and diluting the concentrate. I found that adding water up to 237ml was too weak for my liking, and I far preferred having a total brew size of around 180-200ml.

I also played around with grind size. I kept it fairly fine and ended up settling on 16 on our Niche Zero, which is only slightly coarser than the grind size we use for espresso.

Since then, I have also tried the Aeropress cold brew recipe with some peaberries from Kenya and found it delicious. However, as with all my coffee brewing, I suspect I will tweak the recipe for each new type of bean that I happen to be brewing with.

I know several people have suggested that this recipe would work even better using the inverted method instead of the traditional. And certainly, it could work well. However, we already use the slightly thicker AESIR Aeropress filters, and so next to none dripped through anyway. 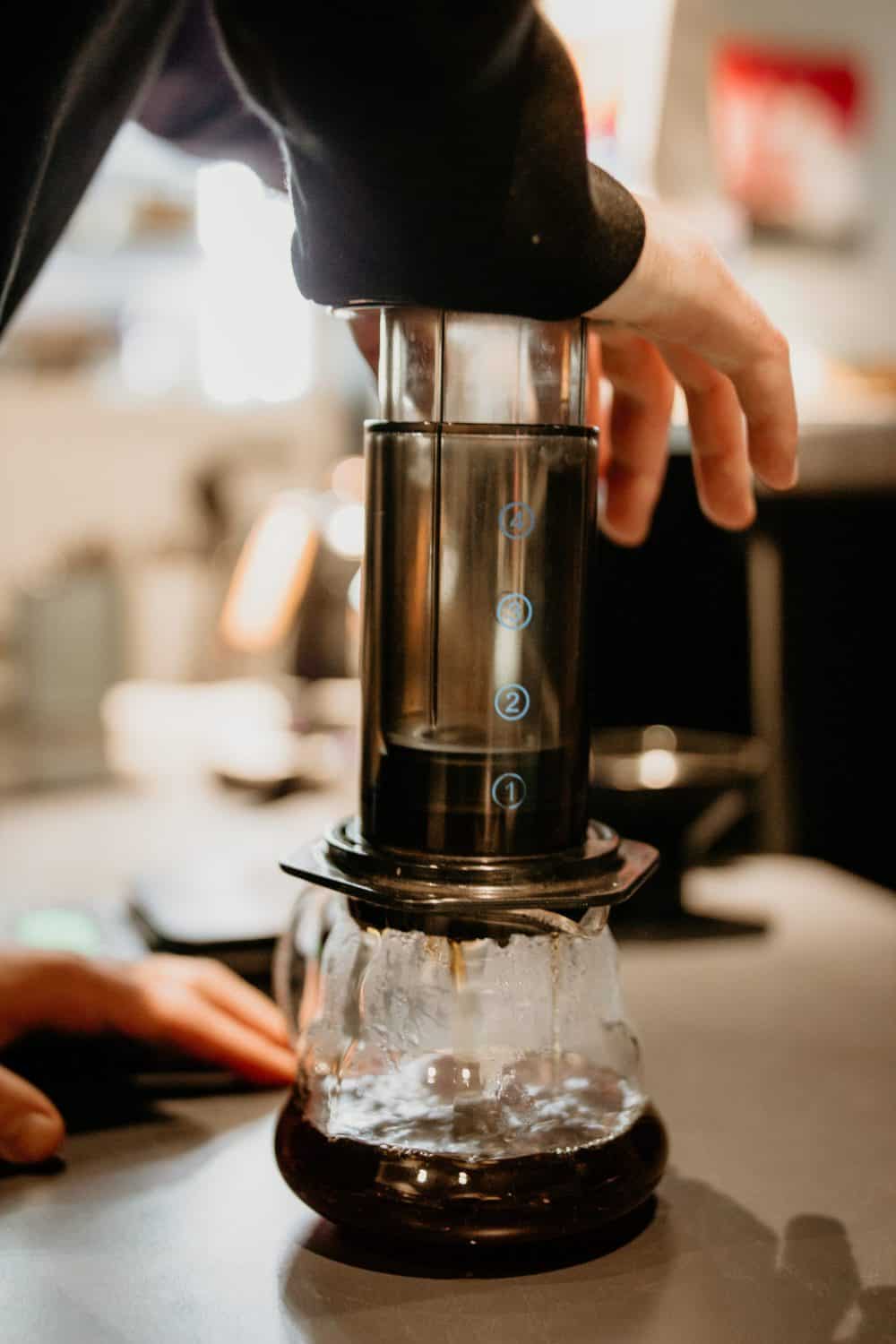 So having tried it extensively, I would highly recommend this Aeropress cold brew recipe. It does make a delicious flavor-rich cold brew that is smooth and sweet and just ridiculously quick to make. Also, the use of room temperature water means that it is a great option when you don’t have access to hot water but still need your caffeine hit.

Will it always be the cold brew recipe I turn to? Probably not. But the sheer simplicity and speed mean that it will be one I regularly come back to. And so if you own an Aeropress, why not give it a shot? You lose nothing and may gain something that makes your summer just that little bit better!